Looking for common table salt side effects on your health? There is no point, especially from a health perspective, to consume what you cannot digest.

What is salt to your body? 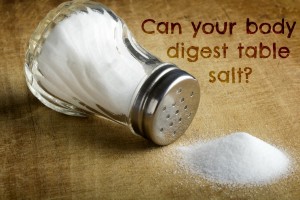 Salt, made up of 40% sodium and 60% chloride, is only dissolved in the stomach’s acid. It is not digested it cannot be used by the body. The type of salt commonly consumed; inorganic salt sodium chloride has no nutrients.

Since the stomach cannot assimilate inorganic salt, it is apparent that it is toxic for your health.

Does the body need salt?

The body needs salt though in an organic form which is usually in fruits and vegetables.

Sodium maintains the critical osmotic balance in human cells and  regulate human hydration, pH levels and the absorption of other nutrients.

Chloride enables the blood to carry carbon dioxide from tissues to the lungs and sodium helps the transmission of nerve impulses signaling the heart muscle to contract.

Salt is such a deadly dietary ingredient yet so abundant.

Whether sea salt or common salt, it is harmful.

Sea salt and common table salt both contain the same amount of sodium chloride by weight. it is only that table salt is processed more and has an additive to prevent clumping.

Effects of salt to your health.

Symptoms of salt concentration and its deficiency in the body include ;

Found in almost all dietary off shelf products, salt has some life threatening side effects on health.

Recent scientific researches show that salt is one of the main causes of blood pressure.

Inorganic salt does accumulate in the blood causing the veins and arteries to weaken.

Being one of the lifestyle diseases causes; salt only leaves you susceptible to diseases and other health disorders such as ;

Common salt builds up gradually in the body affecting vital systems and their functionalities. It causes an irritation on the nervous system and in fatal amounts; it corrodes the nerves deriving you basic functionalities.

Common salt also corrodes the tissue linings water logging them. The chemical effect on the tissues robs calcium from them leaving them in a weakened state. It simply weakens your health support system leaving you much susceptible.

Your skin can dampen, changing its color as a result of sodium chloride concentration in its cells. Accumulation in the muscle and bone structure leads to severe complications.

With its ability to derive calcium, it basically drains the essential nutrients that form and supports your bone structure. This is because of the high rate of calcium used to process salt.

Other complications brought about by common salt intake relate to gastrointestinal system, blood and heart conditions.

Since the body cannot digest table salt, the burden of cleansing this toxic is taken up by the kidneys and the bladder. Whenever the burden becomes unmanageable, it is manifested though body reactions such as swelling around the feet and ankles.

This condition is a result of the body trying to excrete and dump the toxic common salt.

Treatment and management of effects of salt.

Salt does disinfect the mouth and helps unblock the respiratory tract when you inhale salt water steam.

Such a common and somewhat addictive ingredient, pinch by pinch it erodes the health out of your life.