The Mangosteen, a tropical evergreen fruit is a deep reddish-purple when ripe. The rind, its exocarp, is not edible 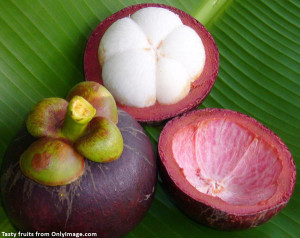 but the endocarp, the inner layer of the ovary is. It is sweet, juicy and fibrous in its taste.  A remarkable fruit from South East Asia, it is known for its abundance in health benefits.

Powerful antioxidants found in the rind, the pericap, of this amazing fruit called Xanthones are abundant providing benefits to the health and wellness of our bodies. The fruit has 43, forty three, different Xanthones each with its own unique health promoting qualities. Identified as the most exciting scientific discovery in the health and wellness field in several decades, it promotes benefits that prevent or reduces the effects of several diseases.

With a combination of nutrients that include Energy, carbohydrates, sugars, dietary fibers, fat, protein and water, here are some of the health benefits of the Mangosteen fruit.

Those are some of the benefits of the Mangosteen, abundant of Xanthones, but are there any adverse effects of the fruit?

Research details that a Xanthone, alpha – mangostin, found in the fruit could stimulate apotitis, a condition that affects leukemia cells. Over consumption of Mangosteen juice has been attributed to weight loss and acidosis. Weight loss, is a benefit though since the loss attributed to Mangosteen effects only burns calories and lipids accumulating in the body’s metabolic system.

With an abundance of benefits to derive from this amazingly nutritious fruit, what is the potential economic benefit of the Mangosteen fruit?

With its discovery, health and wellness companies are cashing on the fruit’s demand.

Nutritionists are now recommending the fruit to all their customers, especially those that require a recuperating diet. Since the Xanthones can be harnessed through different forms such as juices or the eating of the fruits pericap, it is being included as part of the ingredients of health products as a nutrition supplement.

This fruit is being utilized by Health and wellness companies such as Vemma.  Phytochemical values of the fruit are still being researched though.  Horticulturists are also part of the Mangosteen cashiers. Various species of the Mangosteen fruit can be grown outdoors in countries along the tropics. Countries such as Kenya, along the equator, with experienced horticulturists, proper and favorable conditions that can be realized through use of green houses, can be an exporter of the fruit since it requires consistent warm temperatures. Mangosteen and its related products such as juices and supplement products offer a possible enterprise.

diseases nutrition vemma 2012-10-23
Apparent Lifestyle
Previous: Muscle Protein Synthesis; Protein Intake Limit for Exercise Enthusiast.
Next: Ab Workouts: How to get the Most out of Your Overall Fitness.